On Wednesday the 16th of July FC Basel hosted a press conference to discuss the start of the upcoming season. Both coach Paulo Sousa and sporting director Georg Heitz, answered questions from the press and the new kit was presented.

Sport Director Georg Heiz spoke about a busy summer break: We have not only replaced the majority of the coaching staff, but welcomed several new players and lost some valuable team members. The fact that several key players left the club can be regarded as a compliment for our hard work, also supporting the clubs financial concept. We cannot state that no more transfers will take place, as the transfer window is still open until the 31st of August. “

Paulo Sousa doesn’t see the transfer activity to be a problem: „Of course the many changes don’t make my job easier; however the integration of the new players has worked very well so far. In general I am very happy with my first month in Basel.  From day one I felt the player‘s complete commitment and willingness to accept new ideas. We are currently at the beginning of a process where I am communicating our ideas to players and staff. Some players are able to accept the new ideas faster than others, but this is a normal part of the process. We expect a lot from the squad but make sure that we have fun whilst at work. “

Embolo is now a part of the First team

One of Sousa’s goals is to close the gap between FCB’s youth department and the professionals of the first team. Currently only Breel Embolo will be making the move from Basel’s youth to the first team. Other youth team players who attended the training camp at Tagernsee will most likely get some game time and will attend various training sessions with the First team squad from time to time. The transition between the professionals and youth is to become smoother.

Important for Sousa is that he communicates his principals of the game to his team; the system only plays a secondary role: I always want FCB to play the role of the protagonist on the pitch and thereby excite our supporters“.. „The fans are the soul of the club. Even if they will not be able to be present in Aarau, I am sure they will be supporting us. “„Entertaining our fans was one of the tasks Georg Heitz communicated to me, as he believes this task belongs to the head coach’s responsibilities. As we have mainly invested in offensive players you can see where our priorities lie.“

FCB will be kitted out in new home and away strips for the 2014/2015 season. The new kits were presented by Eric Amstein, Sports Marketing Manager Football for Adidas Switzerland, as well as by FCB players Marek Suchy, Tomas Vaclik and Luca Zuffi.  Amstein stated: „The home kit is predominantly red and blue, but also incorporating black and white which represent the city colours. The away kits are mainly black and white, with red and blue elements. The goalkeepers have a choice of 3 shirts. On the neck of all shirts there is an image of the „Muttenzerkurve“, so that the players carry their supporters with them at all times. “Marek Suchy was happy with the new shirts: „ The shirts are light in weight and comfortable to wear. The design is great, as with most Adidas designs. “ 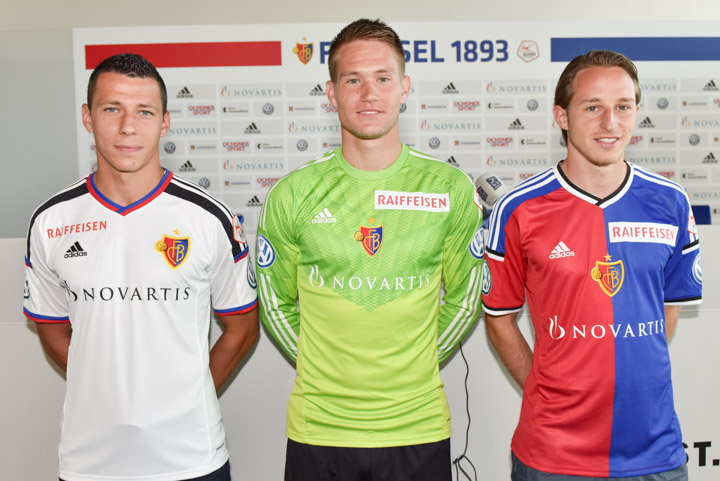