On Thursday, 20. February 2020, FC Basel 1893 face APOEL FC away from home, in the round of the last 32. The Cypriots have been regulars in the European group stages for the past ten years and this season they finished Group A in second place behind Seville. APOEL FC's greatest European success took place in the beginning of the last decade. In addition to long-term injuries, FCB´s young offensive talent, Edon Zhegrova will be missing out due to injury.

The upcoming FCB opponent is not only the Cypriot record champions (28 titles), but also the Cypriot team that has had the greatest international success so far. The club has a large share in Cyprus' rise to 15th place in the UEFA five-year country ranking. Anarthosis Famagusta FC was the first Cypriot club to qualify for a European group stage (Champions League 2008/2009). In the past ten years, however, APOEL FC has been by far the most successful team from Cyprus to compete in the European Cup: During this period they were in the group stage of the Champions League on four occasions. The highlight was the group-win and the advance into the quarter-finals 2011/2012, where they failed to qualify against Real Madrid.

Dealing with pressure is part of our job, we are footballers and have learnt to deal with it since we started playing.

The regularity in which the club has qualified for group phases in the European Cup is impressive: In total, this has been the case eight times in the past ten years - including this season. Thanks to these achievements, APOEL has moved up to 56th place in the UEFA five-year ranking. The Cypriot record champions are behind FCB (29th), but still ahead of the second best Swiss club, the BSC Young Boys (62nd).

The Cypriots show Confindce this season

In the group phase the Cypriots demonstrated that they can compete Europe. They qualified for the 1/16 finals without major problems, behind Seville, but clearly ahead of Qarabag FK and F91 Dudelange….despite losing 3: 4 at home to the Luxembourgers in their opening fixture.

Thanks to the first place in the group Stage, we can play our first leg away from home, this could be a small advantage.

In the domestic league, APOEL, just like FCB, is in third place, five points behind the leader.  APOEL secured participation for the championship play-offs with a 4-1 win against Apollon Limassol, FCB conqueror of last season. APOEL is sure to be confident ahead of the clash against FCB.

ZHEGROVA OUT WITH STRAINED MUSCLE

In Autumn, FCB managed to perform well in the Europa League. The group win and two clear successes against Getafe CF are impressive proof of their strong form. Therefore, it is now necessary to forget about last week´s, disappointing result against FC Thun and concentrate on the difficult task ahead. Unfortunately, recent injuries don´t make things easier.  Luca Zuffi is out for the rest of the season due to a cruciate ligament rupture. Also missing in Nicosia is Edon Zhegrova, who has a strained thigh-muscle.

WE WANT TO WIN EVERY GAME, INTERNATIONAL OR NATIONAL. YOU HAVE PRESSURE FROM THE MEDIA all the time, but WE don´t let this Affect us.

Perhaps this change in surroundings and the change of competition are good for Marcel Koller's team right now, helping them to deal with the setback in the championship. A positive result against the Cypriot record champions would certainly provide a positive push. 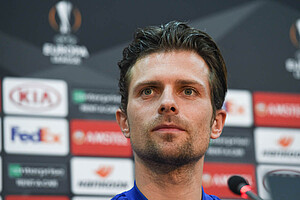