For the eSports department of FC Basel 1893, Tim "TheStrxngeR" Katnawatos and Florian "CodyDerFinisher" Müller will start as a team in the qualification for the FIFA eClub World Cup (FeCWC). Within the FeCWC and for this tournament only, FCB-eSportsman Nicolas "nicolas99fc" Villalba forms a team with the English top star Donovan "F2Tekkz" Hunt. The world number one on the Xbox (Hunt) and the world number two on the PlayStation (Villalba) will compete as team "KiNG eSports".

Unlike the majority of competitions in FIFA eSports, the FeCWC is held as a team competition. A PlayStation player and an Xbox player form a team. The regulations of the world football association FIFA limit each eSports organisation in "FIFA19" to nominate only one team with two players for the FeCWC, whereas in the previous season in "FIFA18" two teams per club were also eligible.

Based on these rules and regulations, FCB-eSports has examined ways to give as many of its four eSports players as possible a chance to participate in the FeCWC and to play for important points to qualify for the FIFA eWorld Cup. In the course of this, contact was made with 17-year-old Donovan "F2Tekkz" Hunt, who is under contract with "F2 Revolution", the agency headed up by global football content creators "The F2". "F2Tekkz" is the dominant player on the Xbox in "FIFA19" and is the undisputed number 1 in the Xbox World Ranking. However, Hunt does not have a competitive PlayStation player at his side in "F2" and was therefore looking for a strong counterpart on PlayStation. Hunt's declared wish was to form a team with FCB-eSportsman Nicolas Villalba - a wish FCB has decided to fulfil. The English-Argentine duo will compete under the flag of "KiNG eSports", the management agency of Nicolas Villalba. In-game, "nicolas99fc" will play in the FCB jerseys as usual. All parties involved have agreed not to disclose any further details of this cooperation.

The FeCWC is part of the "Global Series", a series of tournaments in which FIFA eSports players compete for world ranking points. At the end of "FIFA19", only the top 16 players per console qualify for the highlight of the season, the FIFA eWorld Cup (FeWC). To qualify for the FeCWC, Hunt and Villalba, as well as the FCB duo Katnawatos/Müller, must first go through the mills of an online qualification between 7 and 11 January 2019. At the end of this period, only 15 clubs from around 150 teams worldwide will qualify for the FeCWC Grand Final on 8/9 February 2019 - in addition to defending champion Brøndby IF. Only with the participation in this tournament all qualified players will receive world ranking points. 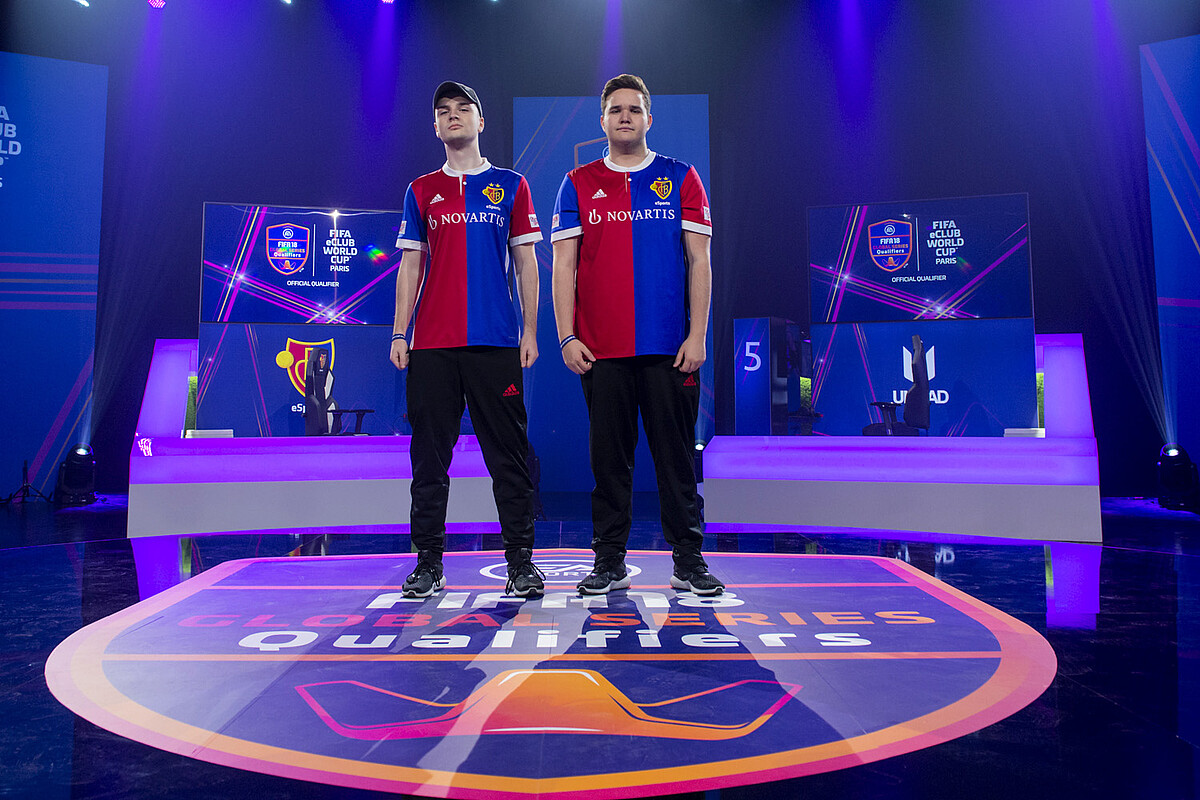 Tim "TheStrxngeR" Katnawatos and Florian "CodyDerFinisher" Müller will start as a team in the qualification for the FIFA eClub World Cup.

This is also the declared goal of Katnawatos and Müller. In "FIFA18", the two Germans managed to beat AS Roma in a highly competitive FeCWC qualifying group thanks to a better goal difference. At the Grand Final in Paris, the two FCB-eSportsmen remained unbeaten in their group, only to suffer their first and final defeat in the quarter-finals. Now the duo hopes to continue this success from last May and to secure a place in the FeCWC Grand Final again as the "FC Basel 1893 eSports" team.